From the Field: Dr Kate Mitchell

The John Monash scholarship generously supported my DPhil in Law studies in Oxford from   2013-2016, where my research focussed on the right of States to legislate public welfare and human rights reform in light of their (often   competing) obligations to protect foreign investment. The task of undertaking a doctorate was an intellectually rigorous one, requiring me to consider the law through a wide lens and equipping me with skills I now employ every day in advising the Committee on human rights.

Admittedly, the DPhil sometimes felt like trying to connect fragments of a disjointed puzzle: initially very scattered with lots of blank spaces, trial and error, moments of sheepishness upon realising that I was assembling the puzzle upside down and had dropped half of the pieces under the couch, and the burst of satisfaction when the fragments finally start to connect.  Along the way, the community of John Monash Scholars that I was fortunate enough to befriend throughout my studies provided a constant source of support, encouragement, and friendship. More broadly, the opportunity to undertake my studies as a John Monash Scholar has given me confidence to be less risk-averse with my career choices, to follow my gut instinct, and pursue things that I am passionate about. I am not sure I would have been able to traverse the long and frequently unwieldy doctoral pathway (not to mention the move back to Australia after several years living overseas) without the support of the John Monash family.

The community of young Australians that proudly call themselves John Monash Scholars is so diverse and they have exposed me to a breadth and depth of different disciplines and issues; I am constantly inspired by my fellow scholars and it is a privilege to be part of this community. 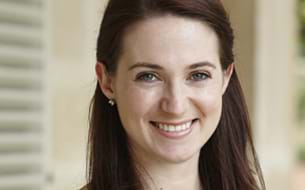 2013 John Monash Scholar Dr Kate Mitchell completed her DPhil in Law at Oxford, where her research focused on how international law can balance the protection and promotion of human rights and public welfare reform with the protection of international investment. Kate completed a Bachelor of Civil Law with Distinction from Oxford and graduated from Bond University with the University Medal and a Bachelor of Law with First Class Honours. Kate is the Principal Research Officer to the Parliamentary Joint Committee on Human Rights.