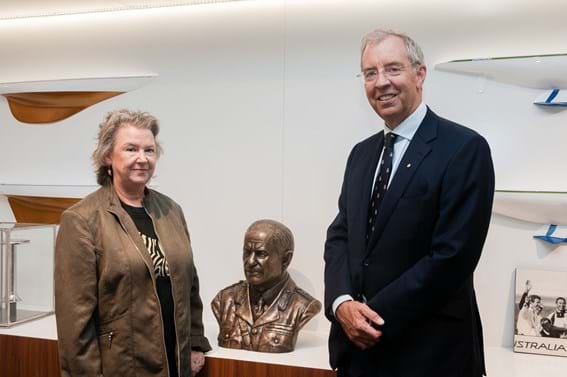 Amongst all the state of the art multi-media displays at the new Sir John Monash Centre at Villers-Bretonneux, visitors will notice on a pedestal a bronze bust of the great General. The sculpture of Sir John Monash was created by Melbourne-based artist Julie Edgar as a commissioned work for Mr Andrew Cannon AM, Honorary Consul to Monaco. Mr Cannon has donated the bust to the Centre to honour his grandfather Robert Henry Cannon, who served in France during the First World War.

Julie Edgar is a specialist in portrait sculptures which are first modelled in clay and then cast into bronze. Edgar said, “I love the permanency of bronze; it has a warmth, strength and monumentality that no other material can match.” The bust of Monash was cast using the “lost wax” method which dates back to Egyptian times and ensures very fine surface detail. Edgar said, “While my use of the medium is firmly based on traditional techniques, the representation is distinctly modern and very much my own style.” In the case of Monash, Edgar sourced a wide range of historical photographs showing him at various stages of his military and civilian career. In consultation with Mr Cannon, the decision was made to depict Monash in the uniform of his rank in 1918 when he had been promoted to Lieutenant General and appointed Corps Commander of the Australian forces. He was then at his fittest and at the pinnacle of his military career and is shown deliberately without hat, a man of action as his subordinates would have known him. Edgar took great care with the accuracy of the military accoutrements of his uniform, even sourcing real AIF brass buttons from the time which were cast as part of the sculpture. 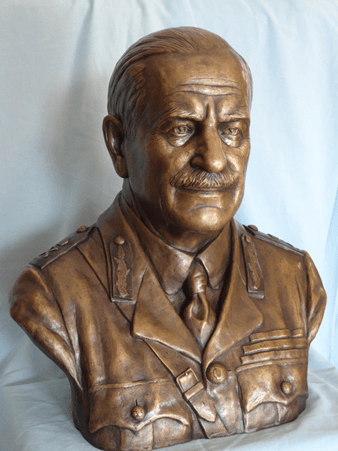 Edgar’s previous portrait subjects have come from a wide range of fields, including such famous Australians as philanthropist Dame Elisabeth Murdoch, immunologist Sir Gustav Nossal, Steven Heathcote, principal dancer with The Australian Ballet and Formula One motor racing legend Sir Jack Brabham. Three of her portrait sculptures are in the collection of the National Portrait Gallery in Canberra. She is also well known for her “Hall of Champions” series of sculptures for the National Motor Racing Museum at Bathurst. Recently she completed a bronze portrait of 1930s blues singer Memphis Minnie for the Blues Hall of Fame in Memphis, Tennessee.

Edgar is frequently asked why she sculpts portraits and her response is that she loves the challenge of transforming a lump of clay into a recognisable face. She said, “There is something magical about this process, a form of visual puzzle solving, simplifying everything down to its essence, namely character and expression.” Edgar is constantly inspired by her subjects and believes strongly in the power of portrait sculpture to celebrate significant individuals in a three dimensional way that painting or photography cannot achieve. She said that for her, sculpture has a physical presence which invites a direct relationship with the viewer. Edgar believes that this is why so many people like to be photographed with her sculptures. The Monash bust has quickly become a much admired part of the Centre at Villers-Bretonneux.