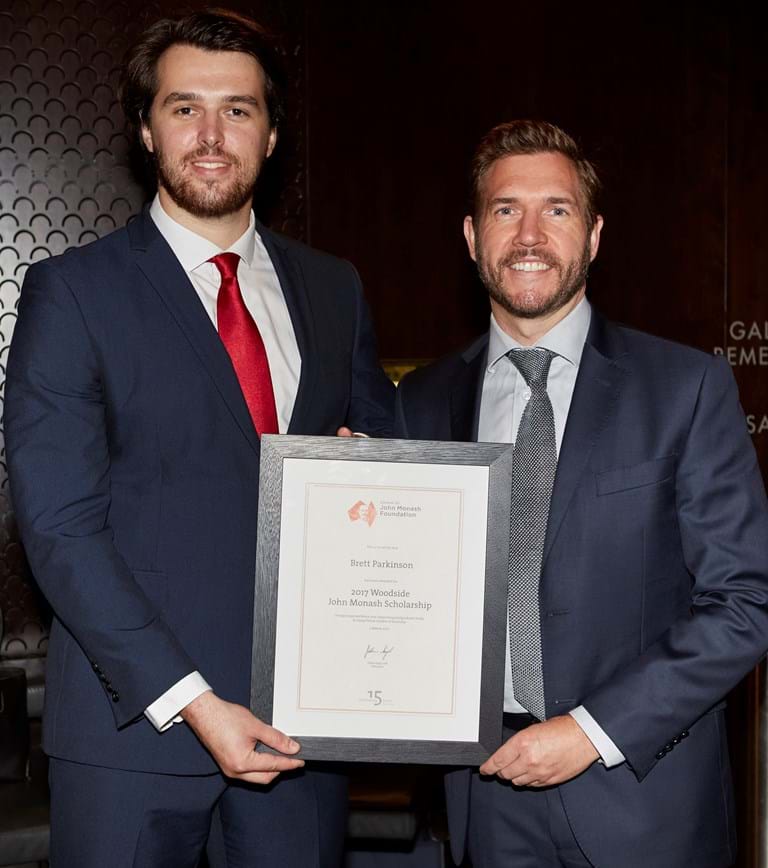 Image: Brett (left) with Theo Anderson (Woodside Energy) at the Presentation of the 2017 John Monash Scholars

For years I’ve seen friend after friend pack their bags and move to the United Kingdom (or ‘the Motherland’ as they joke) to undertake a two-year stint of ‘the London life’. I always thought to myself, why would you move to UK, isn’t their weather horribly cold and constantly raining? This was also at a time when never in my wildest dreams would I have believed someone if they told me I’d be doing a PhD at Imperial College London. But here I am, a few years later conversing with brilliant scientific minds about blue-sky game-changer energy technologies at one of the top technical institutes in the world, all thanks to John Monash Foundation and Woodside Energy; and I have to say, apart from the weather, London doesn’t disappoint.

It got off to a rocky start after arriving in Heathrow from a 2-month backpacking expedition through Central America and the airline losing my bag. I was a walking laugh, a freshly tanned 6-foot-3 Australian wearing sandals, shorts and singlet with a camera strap over his shoulder on the London tube. But after that (and purchasing some warmer clothes), I got right down to work and settling into life in the UK. The chemical engineering department at ICL doesn’t muck around, and within the first week I was knee deep in safety inductions, experimental talks and theoretical debates about the future of the energy landscape. I’m now approaching the end of month two and I’ve finished constructing an experimental rig to handle 1000-degree molten salts and am presenting at a national hydrogen research conference in Scotland in early December. If this is any indication of the pace of the next 3 years, it’s going to be a hell of a ride.

Outside of the university walls, I’ve been lucky enough to be reunited with my beautiful partner Samar who had been here for 6 months before my arrival. We’ve found a nice place in Brixton together and are enjoying the never-ending string of events, gigs and general nightlife that only a city like London and a place like Brixton can offer.  I don’t know where the next 3 years will take us, or what is lying around the corner, but I’m excited for what this opportunity holds. But for now, I’m going to have to do my best to settle indoors, Winter is coming.

Brett completed a Bachelor and Masters of Chemical Engineering with First Class Honours at the University of Queensland. His PhD in Engineering Science will address sustainable energy generation through chemical synthesis for energy storage and ultimately hopes help develop sustainable manufacturing industries and energy policy in Australia. Brett also has a deep commitment to mental health issues within the community, being an active volunteer with Drug Arms Street Outreach Service.